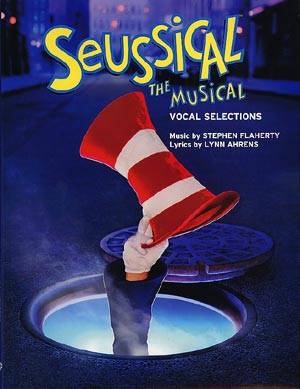 Crescent Comprehensive School, Dooradoyle, is proud to present the FIRST EVER performance of “Seussical the Musical” in Limerick which will be staged at the school over 4 consecutive nights from December 2nd to 5th.

Based on the beloved characters and stories of Dr Seuss, “Seussical” is set in both the Jungle of Nool and Whoville and follows the adventures of Horton, an elephant who one day hears voices coming from a speck of dust, and a young boy called Jo-Jo who is a thinker with a wild imagination.  Featuring many of our favourite characters including The Cat in the Hat, the Grinch and the Whos, this production will take you on a magical journey to a land of song and dance, colour and vitality.  Forget the dreaded “R” word and the letters IMF and be inspired – sign up instead for an enthralling spot of escapism at Crescent Comp!

Directed by Richie Ryan against a backdrop of bright, colourful sets and an infectious pop-inspired score, this unique and superbly quirky musical is a fantastical, visual feast bursting with mischief, fun and imagination in equal parts.  Not surprisingly, Eric Idle of Monty Python fame collaborated on the original storyline and the rhyming dialogue is crammed full of hilarious, non-stop gags guaranteed to have audiences, both young and old, howling with laughter.  If that’s not enough, the song and dance numbers have all the flair and genius of big musical productions faultlessly delivered by the Crescent’s fine young orchestra and cast.  The result is a show brimming with flamboyant energy as “Seussical” promises a fun-filled and highly entertaining evening for all the family.

Produced by the Crescent Music & Drama Department in association with the 4th Year Transition students, the musical is designed especially to showcase emerging young talent in the school.  All proceeds from the night will be invested back into developing music and drama in 2011 with a view to raising the Crescent’s profile in the Performing Arts.

School Principal Nicky Cuddihy explains “We have a long tradition of developing music and drama in the school with many musical achievements to date.  We chose to do “Seussical” specifically because it’s a fantastic show for a young cast and with the energetic dance routines and challenging vocals, it’s the perfect vehicle for the students to demonstrate the depth and breadth of their talent”.

So if you’re looking for something joyful, soulful, energetic and inspiring, why not take yourself and your family to “Seussical the Musical” at Crescent Comprehensive this December for a highly entertaining and very affordable night out……

……  As the Cat in the Hat says “Think and wonder and dream far and wide as you dare! 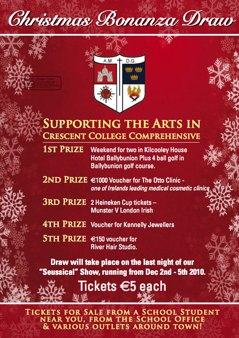 There will also be a Chrtistmas Draw on the final night of the show.

Tickets are €5 each  .. for more information download the details here.