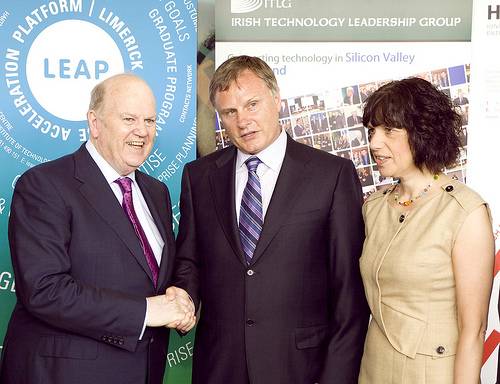 Mr. John Hartnett (Crescent Class of 1980) was honoured at the Limerick Institute of Technology on June 28th, when the Enterprise Centre was named the Hartnett Enterprise Accelleration Centre.

Start-up firms on the institute’s 12-month incubation centre programme are to get direct access to Silicon Valley, thanks to an alliance announced at the opening by John. Under the alliance, the companies will spend one week at the Irish Innovation Centre set up by the leadership group in Silicon Valley, where they will receive intensive business mentoring and strategic advice on how to maximise opportunities in the global market.

John  is currently founder and president of the Irish Technology Leadership Group, a group of high level technology leaders who are Irish or Irish American and who are committed to promoting the technology & investment connection between Ireland and Silicon Valley.  He is also the founder and chairman of the Silicon Valley based ‘Irish Innovation Center’ and is a strategic advisor and active venture capitalist.