Brian Arthur Gaynor was laid to rest in Auckland on 20th May after a short illness. He was 73 years of age.
Brian was born in Limerick, the eldest of 3 children of Kay and Arthur Gaynor . He was educated at Crescent College , where he excelled at Rugby , captained the School Senior Team and also played for Munster Schools at lock in 1966. The Jesuits selected him to be school captain when they must have identified his potential to lead at that early age. He was a very promising golfer, a sport he enjoyed all his life, being a member of 5 New Zealand golf clubs and his beloved Lahinch in county Clare. He was interested in all other sports, especially cricket.

Brian was awarded a B.Comm in Economics at University College Cork and also spent a year on a Rotary Scholarship in Rome University, Georgia , USA which broadened his horizons. He spent a few years teaching Economics in Australia near Bondi Beach and after a short time in London settled in New Zealand where an amazing career began.
Brian started his investment career as a broker with Daysh Renouf & Co. and later became a partner and Head of Research at leading New Zealand Investment Adviser, Jardens. He was a member of the New Zealand Stock Exchange and chaired both the New Zealand Society of Investment Analysts and the Asia Securities Analysts Council . In the late 1980s Brian served as an Advisor to the then Prime Minister David Lange.

Brain Gaynor founded Milford Asset Management in 2003 having served on the Board of the New Zealand Superannuation Fund, a sovereign wealth manager.
Today, Milford manages assets worth more than 9 billion Euro and is a leading provider of services to the Kiwisaver auto-enrollment workplace pension scheme in New Zealand. The company employs 170 staff and has 80,000 clients across New Zealand and Australia.
The fund has been consistently high performing despite all the turmoil that has occurred since its inception. The Kiwisaver Active Growth Fund has achieved a return of 12.3% p .a. since inception against a benchmark of 10% p. a.
New Zealand Stock Exchange ( NZX ) chairman James Miller called Brian Gaynor a Titan of the country’s capital markets . “ Brian would be one of the most influential people in the 150 year history of New Zealand’s capital markets and the NZX , “ he said.

New Zealanders best knew Brian Gaynor as a columnist for the NZ Herald newspaper and in recent years for BusinessDesk , a wire service in which he was an investor.
Tributes from former business and media colleagues all highlighted his advocacy for the rights of small investors and for strong stock exchange regulation.
His columns regularly took contrarian positions , warning against the sale of key National New Zealand Assets to overseas interests , unlikely to prioritise his adopted country’s interests.
His weekly column had a huge following and he was regarded as a fearless economics writer who was invariably correct.

Brian’s media column was rooted in an encyclopaedic memory of past events. but he also embraced the future and modern trends. His weekly column moved to BusinessDesk online publication in 2018 when he stepped back from an executive role at Milford Asset. Through his investment, strategic vision, energy and drive BusinessDesk has been transformed in a short period of time. It has evolved into a vibrant and much respected online subscriber business publication. BusinessDesk’s success resulted in it being acquired by the NZ Herald last year.

Brian was the much loved husband of Anna and father of Peter and the late David who died in 2011 aged 17. Brian’s beloved younger sister Brenda passed away in 2019.

Speaking at the memorial service in Auckland , Brian’s brother Dermot described Brian as “ an extraordinary man who lived his life in an ordinary way” He is remembered as a man of deep convictions who lived his life to an ethical moral compass.
His gregarious personality, keen intellect , engaging conversations and generous spirit have departed much too soon.
Brian was excellent at maintaining personal relationships with friends and relations around the world. All his old school pals were looking forward to his first trip back to Ireland this June after 3 long years. He had made over 60 trips in 48 years. We all had gone our separate ways but when we met up again, nothing had changed. Always the same Brian.

Rest in peace dear friend. You were the best. 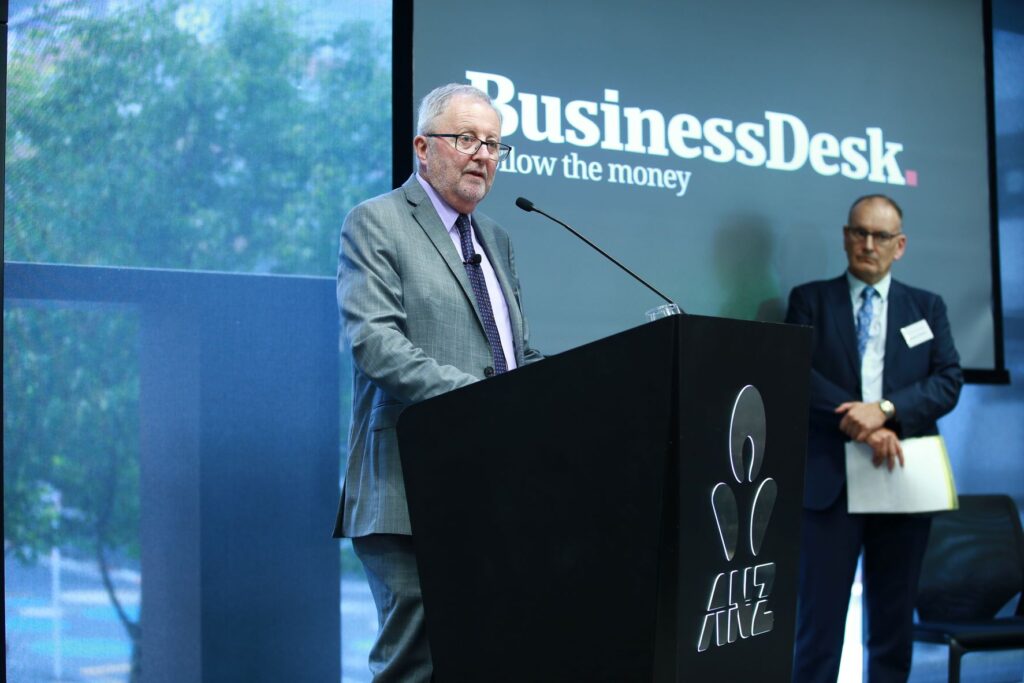