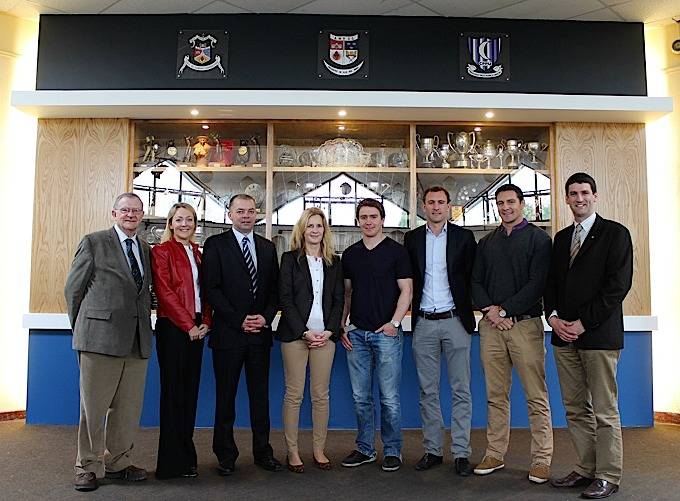 The final assembly of 2014 saw the entire school fill the central area at Crescent on Wednesday 14th May.  School Principal Nicholas Cuddihy addressed the pupils – who were brimming with end of term excitement and for many ..  exam stress.

It was also a day of celebration of the many achievements of Crescent in the last school year 2013-2014 in sport, science and the arts with a number of awards, plaques and trophies being presented to the assembly.

This was also the occasion when the recently completed Crescent Trophy Room was officially opened.  Following an address to the pupils and staff by Past Pupils Union President Don Reddan the unveiling was made by four sporting heroes of the school from recent years who kindly attended the event.  We’d like to sincerely thank David Wallace, Eoin Reddan, Gina Niland and Conor Niland who came to the school and added more than a touch of excitement and prestige to the launch.

The new cabinet has a prominent position in the school central area and bears a plaque which thanks all the past pupils who contributed to making the trophy room a reality.  From the photos below you will see that the trophy room is already replete with cups, plaques and awards from sport, science and the arts and the coming years will see hopefully many more additions to the shelves.

We’d like to also mention that the Principal of the school Nick Cuddihy has also invited all those who subscribed and the committee and any of the past pupils who are present to attend a barbeque on May 22nd in the college grounds at 7.30pm for all those who assist in the running of the school on a voluntary basis.

Can we also thank Michael Cowhey who took the photos of the opening and supplied them to us.