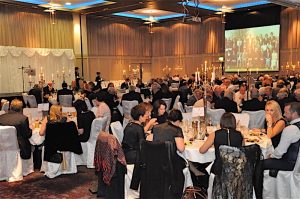 The Crescent Past Pupils Annual Diner 2016 was once again an fantastic event.
The dinner was held in the Strand Hotel in Limerick and with a great turnout the evening was most enjoyable.

Thanks to all those who attended and supported the event .. and for those who knew but kept quiet about the score in the Ireland v New Zealand match in Chicago. 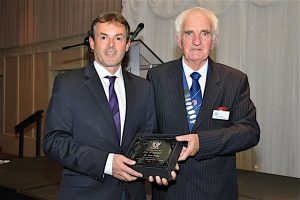 The recipient of the Roll of Honour award for 2016 was Paul Rellis (class of 1984). Paul is currently the Chief Operations Officer for Microsoft in Western Europe and has previously held positions with Coca Cola and was president of the American Chamber of Commerce in Ireland and president and board member of IBEC. He was accompanied by his wife Lisa, his parents and the extensive Rellis family who are all Crescent past pupils. He made a very well received speech which ranged from his time in school through to some of his thoughts and insights on the future of IT and technology in an increasingly interconnected world.

Following the dinner we had a Prize Raffle which raises funds for the Union. We’d like to thank our most generous sponsors again for their support.

We hope to see many of our guests again in 2017 .. the venue is already booked and we are looking to another great evening.