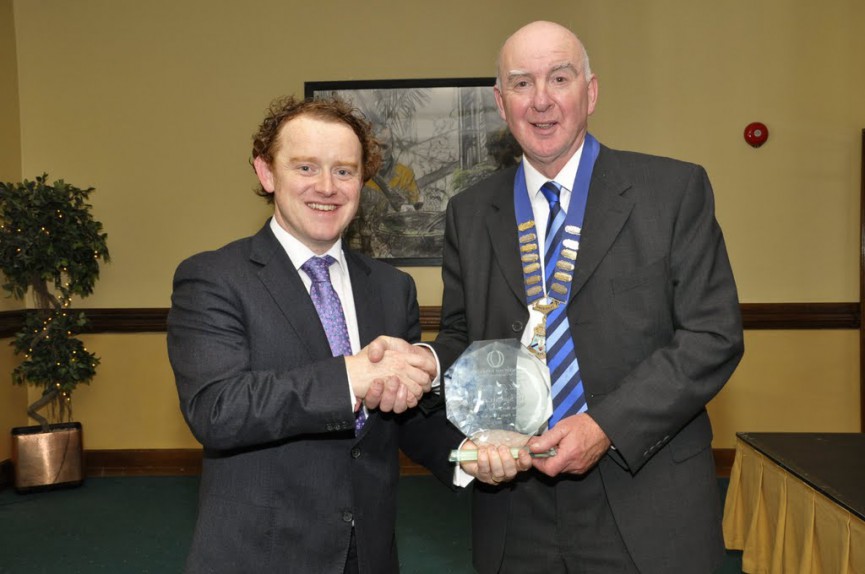 Once again the Annual Past Pupils Dinner has been a huge success.  Held just over a week ago in the Castletroy Park Hotel on Saturday 3rd November we had a great turn-out of over 130 past pupils from the Crescent old and new plus guests & friends.

Irish Times Journalist Simon Carswell was presented with the Roll of Honour award by President of the Past Pupils Union Brien Morris.  The award is presented each year to a Past Pupil of the Crescent who has distinguished themselves in the fields of sport, culture, business or the arts.  Simon’s parents and several of his Crescent classmates were present on the night to support him and celebrate this honour from the Past Pupils Union.  He made an entertaining and thought-provoking acceptance speech which was well received and reflected the work Simon has done in his role as Finance Correspondent of the Irish Times and author of the highly-successful book “Anglo Republic – inside the bank that broke Ireland”.  You can follow Simon on Twitter (https://twitter.com/SiCarswell) or read his analysis in the Irish Times.

The evening also saw a number of smaller class reunions with several tables of Crescent boys from 1957, 1960, 1963, 1964 & 1970 plus tables from the new Crescent Comprehensive from 1986 & 1988.
There were also a large number of past pupils at the dinner from every decade from the fifties through to the noughties and many have already expressed an interest in getting a group of classmates together for the event in 2013.

The Past Pupils Union are keen to encourage class reunions and if you’re planning an event in 2013 or would like to take a table or organise a group for the Annual Dinner in 2013, then please contact us and we will do our best to help.