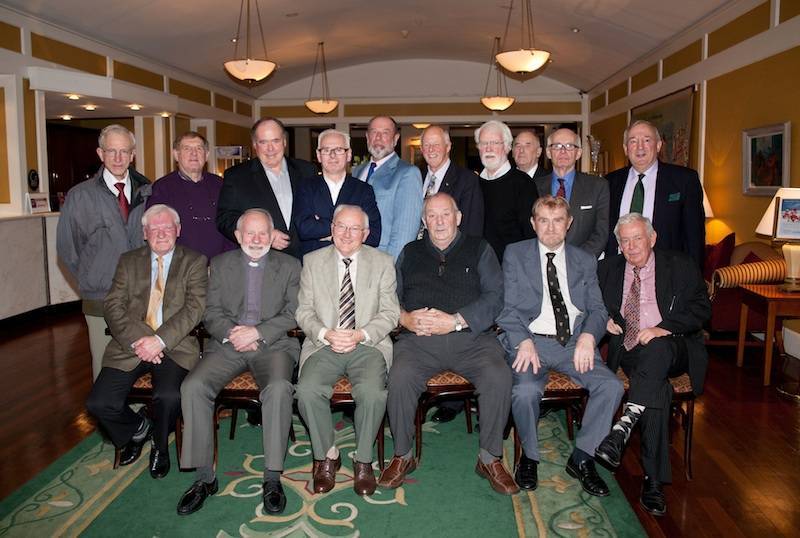 On 19th November a 50-year reunion for the Rhetoric Class of 1960/61 at The Crescent was held in Limerick.Â  Our only previous reunion was that for 30 years held in 1991.Â  The final class was quite small (only 20) so we included as many as we could trace of those who had spent some time with us over an 11 year attendance at the school.On this occasion we managed to get together a total of 17 classmates (including one from USA and one from London).Â

We started with Mass celebrated by John Humphreys, S.J. – we sat around in a circle and several of the gathering spoke to remember many of our teachers and classmates who had passed on (including three since our last meeting in 1991) or were unable to be present on the night.Â  For a number of those present, this intimate Mass/prayer gathering was a highlight.

With such a small group we were able to sit around a single table for a meal and this added to the Â feeling of camaraderie which was very evident even though many of us had not met for anything between 20 and 50 years.Â  The reminiscing never stopped and if you closed your eyes it sounded exactly as it was 50 years ago – fellows don’t change – they just look a little older but still go on with the same banter and mimicry. During the evening we made phone contact with Frank Ahern, one of our classmates, who is hospitalised in the USA and everyone present spoke to him.Â  We also had a video of our 1991 reunion and this gave us all a good laugh.

All in all it was a most enjoyable evening and everyone agreed that we should repeat the exercise.Â  However it was felt that it would be too risky to leave it for another 20 years, so we decided that we would try again in 2016.