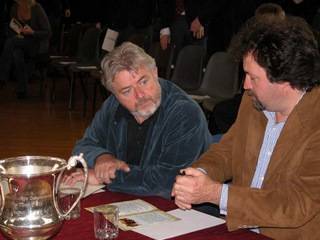 In October, two past pupils from the world of music Bill Whelan (Class of 1968) and Réamonn Keary (Class of 1979) acted as adjudicators for the Celebracion de Musica, which featured choirs and orchestras from our fellow Jesuit schools in Ireland.

Another past pupil, Richard Harris (Class of 1949) was honoured with a performance of his iconic hit, “MacArthur Park” by a past pupils orchestra who came together for the occasion. Bill Whelan introduced the piece with a letter from the composer Jimmy Webb, which was a fantastic honour for all involved. Richie Ryan (Class of 1981) performed the vocal solo, accompanied by an orchestra of past and some current pupils. Many thanks to CCC Music teacher Róisín Lavery for organising this very special event.