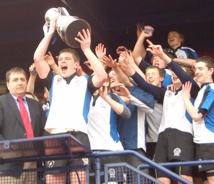 While many of you will have heard of the Munster Junior Cup win last week there are many aspects of the victory that will give pride to the Union. The team was coached by four past pupils.

Crescent beat four of the major schools in their road to victory: Pres., Rockwell, Glenstal and, of course, Christians. It was an added bonus that we went to Musgrave Park to bring the cup home.

David Wallace played in the last Junior success and he would have been proud of the tenacity and commitment of the present back row. Defeated last year by an agonising one point this team were determined to set the record straight.

Captain, Diarmuid Dee said, “I am absolutely delighted. We have been training so long, and the coaches have put in so much with us. Today was our day really.”

Another irony is that in the four previous cup final defeats, teams were also coached by past pupils, four of whom are still on staff: Chris Cullinan (1980), Brian Campbell (1983), Dermot Cowhey (1976), Dudley Herbert (1971) and Denis Higgins (1973). In a further ‘first’, Tony’s dad Gerry Trehy, also coached Junior cup teams with the late Bill Troddyn S.J.

Niall O’Shea commented, “This year was very important for the school. We needed to refocus.”

Crucial scores came from young Greg O’Shea (son of Niall) and an outstanding back row display from Jack Dineen (son of Len Jr.) ensured that he cup was destined for Dooradoyle.

While a time for celebration it is also poignant to remember two former coaches who passed away recently: Brendan McElduff and Niall Cantrell. May they rest in peace.